The best of southern Italy in 12 days 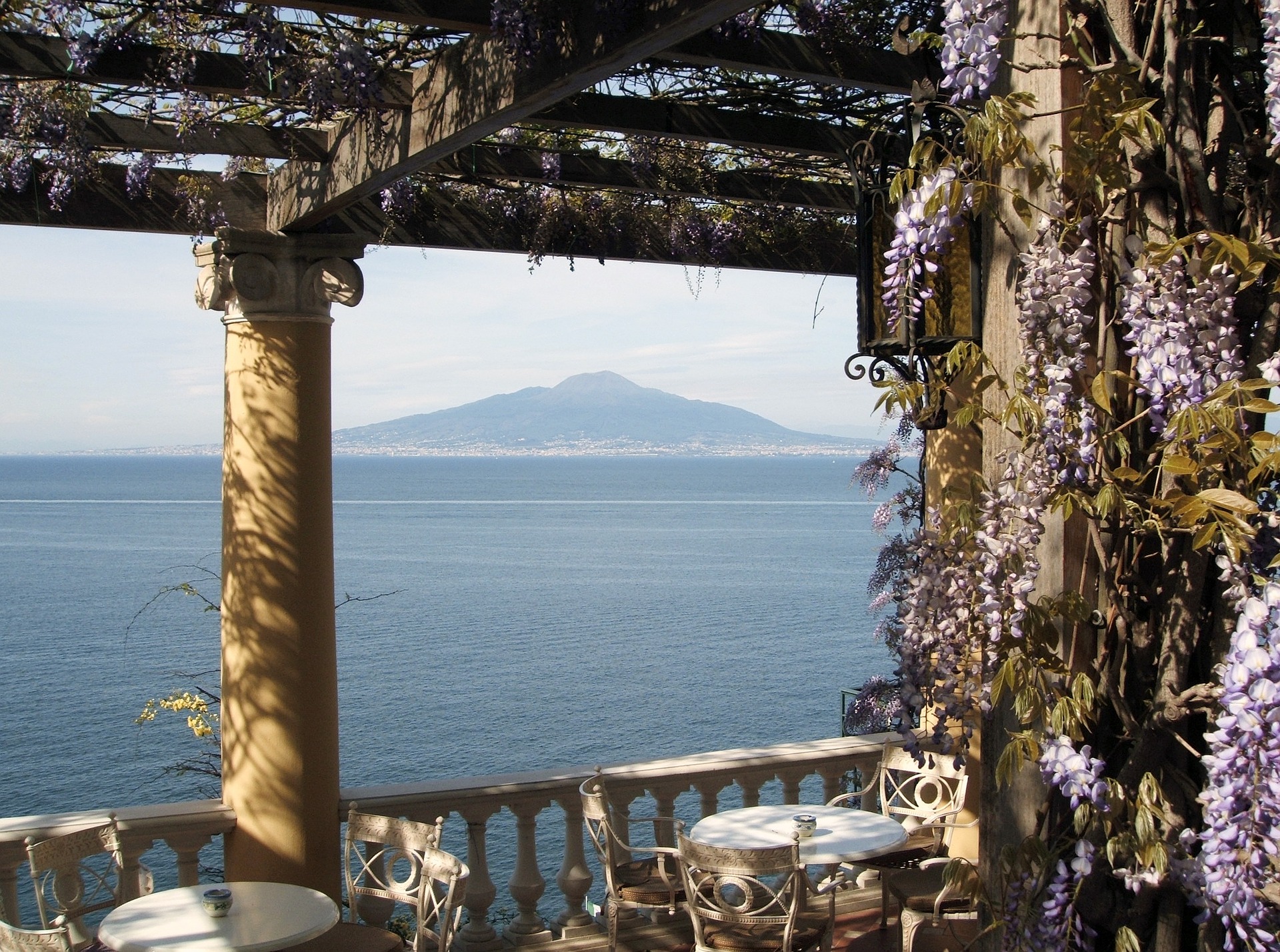 Period: Available all the year, on request
Location: South of Italy: from Rome to Salerno
Price: TBA ()
Description:

Discover the south of Italy: enjoy the sun, the numerous beaches, beautiful islands like Capri and the Amalfi coast. Be impressed by wonderful landscapes, taste the typical mozzarella and eat the real Italian pizza.

Breakfast at hotel Free morning and free lunch Meeting in hotel with your private guide and transfer by private minivan to Caserta and guided tour of the Reggia. The one compelling reason to visit the town of Caserta, 30km north of Naples, is to gasp at the World Heritage. The former palace is the largest in the world by volume, and its 18th- and 19th-century Royal Apartments are a breathtaking sweep of marble, frescoes, monumental paintings and period furnishings. The palace gardens are worth a visit alone, stretching over 3km in a baroque spectacle of fountains and pools. At the end back to Naples. Free dinner and overnight in  Naples Hotel Grand Hotel Parker’s 5*

Breakfast at hotel Meeting in hotel with your private guide and transfer to Capodimonte museum, that is the prime repository of Neapolitan painting and decorative arts with several important works from other Italian schools of painting, and some important ancient Roman sculptures. It is one of the largest museums in Italy. The museum preserves  a series of paintings coming from Neapolitan churches, among them two Caravaggio masterpieces. Transfer to Naples archeological museum and guided tour in a city Blessed with rich volcanic soils, a bountiful sea, and countless generations of culinary know-how, the Naples region is one of Italy’s epicurean heavyweights. It’s here that you’ll find the country’s best pizza, pasta and espresso, its most appetising street markets, not to mention some of its most celebrated dishes. At the end of the visit return in hotel, free lunch and free time. Free dinner and overnight in Naples Hotel Grand Hotel Parker’s 5*

Breakfast at hotel Meeting with your guide and transfer to the Vesuvio. Infamous for its explosive Plinian eruptions and surrounding urban sprawl,Vesuvio is also one of the world’s most carefully monitored volcanoes. Another full-scale eruption would be catastrophic. More than half a million people live in the so-called ‘red zone’, the area most vulnerable to pyroclastic flows and crushing pyroclastic deposits in a major eruption. Yet, despite government incentives to relocate, few residents are willing to leave.  The guide will escort you until 1000 mt, then you will leave the minibus in order to reach the crater with local guides. You will climb until the crater and walk escorted by vulcanological guides posted in some key points along the path in order to give you all the informations and control the safety of the visitors. Once you finish the walk, the guide will escort you to a beautiful agriturismo for a tasting. Later return to the hotel. Free dinner and overnight in Naples Hotel Grand Hotel Parker’s 5*

Breakfast at hotel. Meeting with your guide and transfer to the excavations of Pompeii and Ercolano.

Ercolano is an uninspiring Neapolitan suburb that’s home to one of Italy’s best-preserved ancient sites: Herculaneum. A superbly conserved fishing town, the site is smaller and less daunting than Pompeii. Modern-day Pompeii may feel like a nondescript satellite of Naples, but it’s here that you’ll find Europe’s most compelling archaeological site: the ruins of Pompeii. Sprawling and haunting, the site is a stark reminder of the malign forces that lie deep inside Vesuvius. Free lunch along the path and continuation to Sorrento Free dinner and overnight in Sorrento Hotel Parco dei Principi di Sorrento 5*

Breakfast at hotel Meeting with your guide at hotel and guided tour of Sorrento wich is nonetheless a civilised and beautiful town. Even the souvenirs are a cut above the norm, with plenty of fine old shops selling the ceramics, lacework and intarsio (marquetry items) that are famously produced here. The town has gorgeous Renaissance and Baroque architecture, and a big variety of restaurants, shops and cafés. Built around the 11th century, the Romanesque Cathedral of Sorrento is the city’s most important landmark. The charming Bell Tower with the beautiful majolica clock is the first thing that you will notice. You will also enjoy a traditional products tasting like lemon caciotta, mozzarella braid, with and black olives, salami, seasonal vegetables, bruschetta with oil and oregano, wine. Free afternoon and dinner. Overnight in Sorrento Hotel Parco dei Principi di Sorrento 5*

Breakfast at hotel Meeting with your guide and private transfer to the port of Sorrento where you will take the fast ship Sorrento/Capri/Sorrento to enjoy a beautiful guided tour in Capri,  a beautiful Italian island that has attracted many a celebrity to its rocky shores where most visitors arrive at the Marina Grande on boats from Sorrento or the Amalfi Coast, and Anacapri Return in Sorrento in late afternoon. Transfer from the harbour to the hotel. Free dinner and overnight in Sorrento Hotel Parco dei Principi di Sorrento 5*

Breakfast at hotel, Meeting with your guide and transfer from Piano di Sorrento to Amalfi, the main town of the coast on which it is located, named Amalfi Coast, and is today an important tourist destination together with other towns on the same coast, such as Positano, Ravello and others. It is hard to grasp that pretty little Amalfi, with its sun-filled piazzas and small beach, was once a maritime superpower with a population of more than 70,000. For one thing, it’s not a big place – you can easily walk from one end to the other in about 20 minutes. For another, there are very few historical buildings of note. The explanation is chilling: most of the old city, and its populace, simply slid into the sea during an earthquake in 1343. Despite this, the town exudes a sense of history and culture, most notably in its breathtaking cathedral and fascinating paper museum.  Than break in Positano a colourful Italian town in the Campania region, with vertiginous houses tumbling down to the sea in a cascade of sun-bleached peach, pink and terracotta. No less colourful are its steep streets and steps, flanked by wisteria-draped hotels, smart restaurants and fashionable retailers. Overlooking the turquoise blue waters of the Mediterranean Sea, this seaside paradise is home to traditional terracotta houses on a steep hill and a small marina with fishing boats in order to admire the village from the lookout. Stop to Conca dei Marini for the visit of the Emerald cave. Arrival in Amalfi and tour of the Amalfi center and visit of the famous Cathedral. Free lunch and in the afternoon continuation to Ravello, a village founded in the 5th century as a shelter place against the barbarian invasions which marked the end of the Western Roman Empire Ravello is also a refined, polished town almost entirely dedicated to tourism. Boasting impeccable bohemian credentials – Wagner, DH Lawrence and Virginia Woolf all spent time here – it’s today known for its ravishing gardens and stupendous views, the best in the world according to former resident Gore Vidal, and certainly the best on the coast. We will stop here in order to visit the marvellous city center. Free dinner and overnight in Positano at Hotel Palazzo Marzioli

Breakfast at hotel Meeting with the guide in Positano and continuation to fiordo di Furore and Paestum excavations. Positano was a major ancient Greek city on the coast of theTyrrhenian Sea in Magna Graecia (southern Italy). The ruins of Paestum are famous for their three ancient Greek temples in the Doric Order, dating from about 600 to 450 BC, which are in a very good state of preservation. The city walls and amphitheatre are largely intact, and the bottom of the walls of many other structures remain, as well as paved roads. The site is open to the public, and there is a modern national museum within it, which also contains the finds from the associated Greek site of Foce del Sele

You will enjoy also a typical products tasting in a dairy that produces mozzarelle and a tour of the breeding farm, you will discover the production of mozzarella and the making of artisanal leather buffalo products and the company museum; then will follow some tasting of mozzarella bites, ricotta cheese, tomato salad, green salad, home-made yogurt, home-made bread, rustic bread, white wine, mineral water, ice-cream.

Breakfast at hotel Meeting with the guide and transfer to Salerno where you will discover the ancient heart of the city starting from the cathedral founded in XI cenntury by the norman conqueror Roberto il Guiscardo and dadicated to Matthew the Apostle. Salerno  has a charming, if gritty, individuality, especially around its ostensibly tatty centro storico (historic centre), where medieval churches and neighbourhood trattorias reek with the addictive essence of southern Italy. The city has invested in various urban-regeneration programs centred on this historic neighbourhood, which features a tree-lined seafront promenade widely considered to be one of the cheeriest and most attractive in Italy. You will continue your promenade towards the Minerva’s Garden (the garden as well as being the first botanical garden, has a wonderful sight) and you will conclude with a walk until the Porta Nova, the ester limit of the city. Free lunch and transfer to Naples

Breakfast at hotel and transfer to the airport of Naples