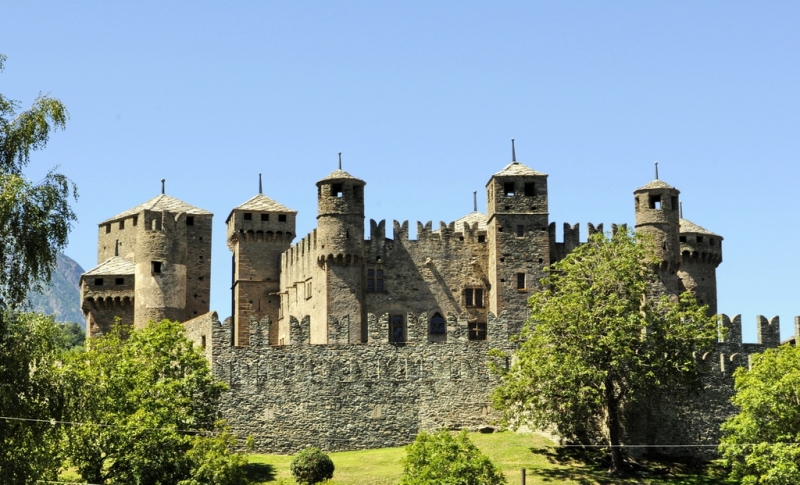 The nostalgic tour of Valle D’Aosta: wonderful walkings, food and wine tastings, testimonies of the past. You will visit remote villages and castles located among the mountains.

Arrival in Milano airport and transfer to Aosta for a guided visit of the city in order to observe the main roman and medieval testimonies: the arch of August, the “Collegiata of Sant’Orso” with the roman cloister, Porta Praetoria and the roman walls, the roman theatre, the cathedral, the forensic porch, the city hall. Then accommodation in the hotel, dinner and overnight.

Breakfast, meeting with the guide and departure for the Fenis Castle, one of the most beautiful of Europe. Outside it is one of the most famous exemples of military medieval architecture, inside it is a refined residence of the beginning of the V century. After the visit, lunch in a restaurant and prosecution for the Castle of Issogne, which is the most well-preserved castle of the area. It still preserves ceilings and furniture original of the V century. The frescoes and the graffiti conduct us through a magical journey in the ancient courtly dimension. Then we will continue towards Bard with a visit of the medieval village, description of the site history and evocation of the Napoleonic siege. The village of Bard is an ancient village made of streets, on the “Via Francigena”. It keeps the testimonies of the past, from the roman time of the VII century. Then back to the hotel in Aosta, dinner and overnight.

Breakfast and departure for Valpelline to taste the Fontina, the most characteristic DOP product of the area. The visit of the caves is very impressive, because they are produced in ancient mines abandoned which accept today 60.000 types of fontina. Entrance with tasting of the product. Departure for Milan and overnight at the hotel.

Breakfast in Milan and guided tour of the city: Castello Sforzesco, Vittorio Emanuele gallery, Scala theatre, Santa Maria delle Grazie church, and the Pinacoteca. In the evening transfer at Malpensa airport and departure for home.

Possibility to combine some days over the north lakes

Prices starting from 400.00 euro per person

The price is based on a minimum of 30 participants